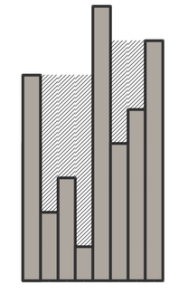 Mirko dreamt of a histogram last night that consists of

~N~ columns. Each column is one meter wide and the heights of the columns in meters are

The capacity of a histogram is the maximal amount of water that a histogram can hold so that the configuration of the water is "stable", or, in other words, that it doesn’t move under the influence of gravity. The image on the right depicts an example of a stable configuration.

Formally, let us denote the heights of water above the columns with

The configuration of the water is stable if the following holds:

When Mirko woke up, he wanted to know whether he could somehow choose the heights of columns that are a permutation of the set {

~X~. Help Mirko and find one histogram that meets his requirements.

If a histogram of capacity exactly

~h_1, h_2, ..., h_N~ that meet the given requirements in the first line separated by space. If there are multiple such solutions, output any.

In this configuration, it holds

In this configuration it holds

The sample corresponds to the image from the task.