The pride of the Asia-Pacific region is the newly constructed Great Circular Zoo. Situated on a small Pacific island, it consists of a large circle of different enclosures, each containing its own exotic animal as illustrated below. 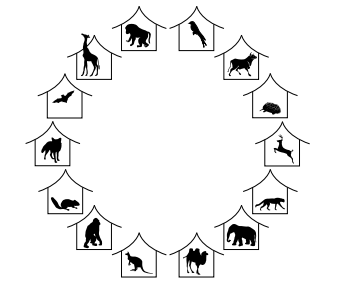 You are in charge of public relations for the zoo, which means it is your job to keep people as happy as possible. A busload of schoolchildren has just arrived, and you are eager to please them. However, this is no easy task—there are animals that some children love, and there are animals that some children fear. For example, little Alex loves monkeys and koalas because they are cute, but fears lions because of their sharp teeth. On the other hand, Polly loves lions because of their beautiful manes, but fears koalas because they are extremely smelly.

You have the option of removing some animals from their enclosures, so that children are not afraid. However, you are worried that if you remove too many animals then this will leave the children with nothing to look at. Your task is to decide which animals to remove so that as many children can be made happy as possible.

For example, consider the list of children and animals illustrated below: 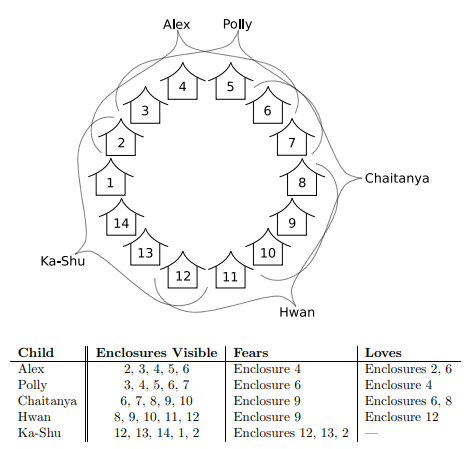 Suppose you remove the animals from enclosures

~12~. This will make Alex and Ka-Shu happy, because at least one animal that they fear has gone. This will also keep Chaitanya happy, since both enclosures

~6~ instead. Alex and Polly will be happy because the animals that they fear in enclosures

~6~ have gone. Chaitanya will be happy because, even though animal

~6~ has gone, he can still see the animal in enclosure

~8~ which he loves. Likewise, Hwan will be happy because she can now see the animal in enclosure

~12~, which she loves. The only person unhappy will be Ka-Shu.

Finally, suppose you put the animals back once more and then remove only the animal from enclosure

The first line of input will be of the form

~N~ is the number of animal enclosures

~C~ is the number of children

Following this will be

~C~ additional lines of input, where each line describes a single child. Each of these lines will be of the form

~E~ (so the child with lowest

~E~ will appear first and the child with largest

~E~ will appear last). Note that more than one child may have the same first enclosure

Output must consist of a single integer, giving the largest number of children that can be made happy.

The first sample case is the example discussed earlier, in which all

The score for each input scenario will be

~100\%~ if the correct answer is written to the output file, and